The opportunity to hunt such a magnificent deer is an experience on it’s own. But being able to harvest for the first time, a whitetail at that, is a once in a lifetime experience. The adventure from beginning to end can never be relived, like no two snowflakes being alike. Topping this experience is going to be tough!

For some reason, it seems driving to a destination takes longer than driving home from a destination. And you know what, I wouldn’t have it any other way. It was past 6pm, icy roads and snow glazed hills were waiting miles ahead and we were still searching for a place to eat dinner. All of a sudden, a mule deer made an appeared in the middle of the road. It was a buck, one of the larger bucks we had seen on the whole trip! I slammed on my truck’s brakes and for some reason I honked the horn, but we won’t talk about that, haha. The buck walked off unfazed, without a care in the world. 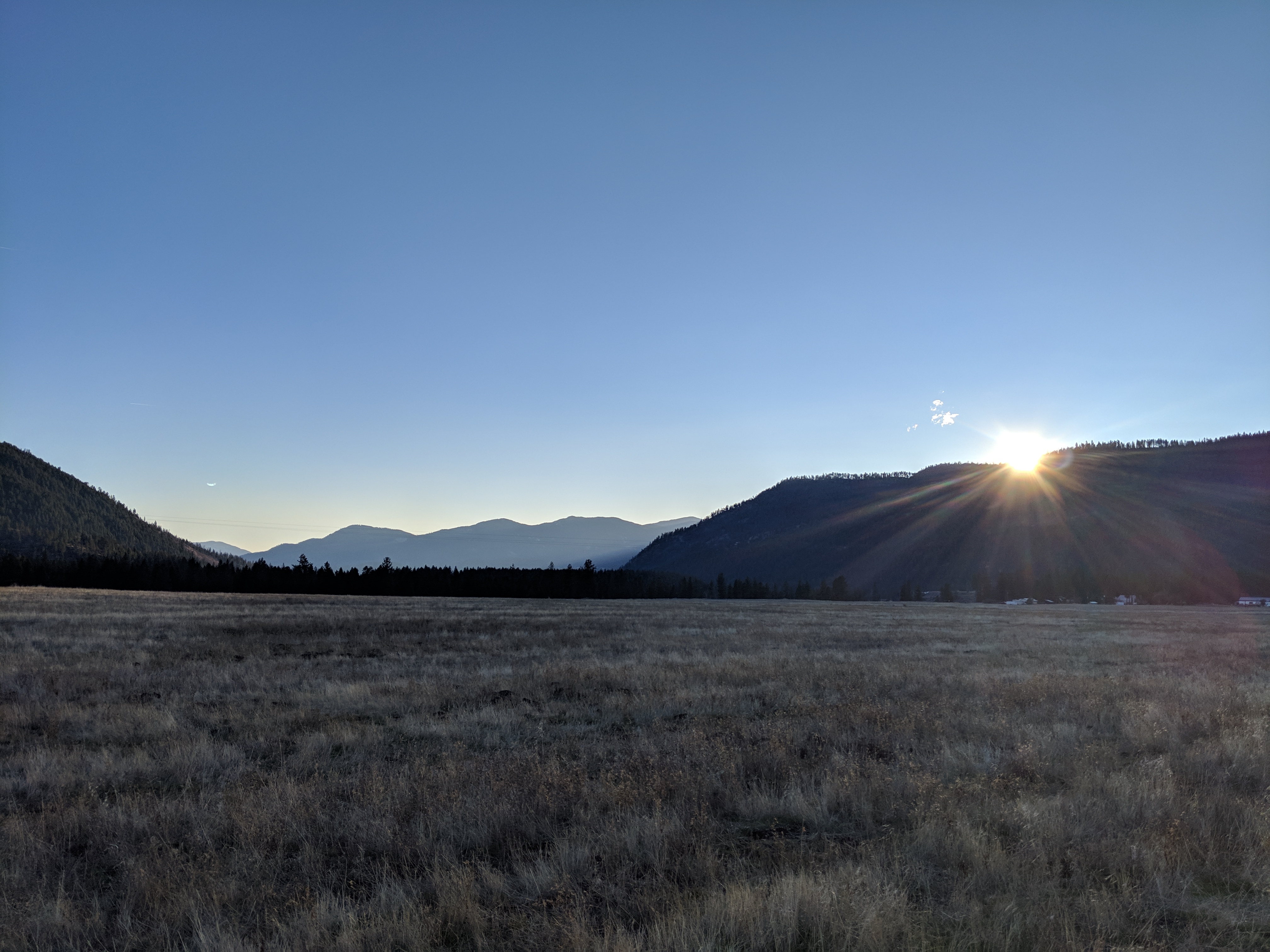 Our morning hunt was fueled with determination and readiness… or so we thought. Not sure how two driven hunters manage to forget hunting vests and our firearms in the hotel room, LOL. Was this going to be our weekend hunt’s theme?! Once on track, we moseyed over to our morning hunt location. Nestling ourselves up high on the corner of a small valley appeared a doe and her fawn frantically climbing to the top of the mountain across the valley. My instinct kept telling me this was the location we needed to remain in. After agreeing to change locations and while adjusting my hunting pack, my attention was turned to a whitetail’s behind prancing over the valley’s side behind me. Dang it. After relocating north and settling in, there was no wildlife to be seen, but leaving the mountain side late morning gifted us the opportunity to see more doe and their fawns littering the valley we had glassed earlier. I made sure to document the wildlife information within my onX Hunt app for our next adventure!

Before starting our afternoon hunt, we paid a visit to a local. Why, you ask? Well, after scouting the land on our last adventure, we knew hiking down a mountain side then back up with a deer would be a near impossible feat. That’s when I decided to stick my neck out there and contacted the landowners in the valley whose property bordered the base of the mountain side. Why not, I was hopeful! Plus, hauling out our harvest would be much easier across a black Angus cattle field than hiking up a steep mountain side, haha. Any-who, one local I contacted denied access through his property to/from the public land, but he encourage us to pay a visit when we were in town again. So we did! This gentleman shared history of the town from when he became a resident in 1944. He told us about hunting experiences his friends and family had, showing us pictures of successful harvests. There was even a couple fishing stories mixed in there, too. He and his stories were a delight. I couldn’t be more thankful for the time we got to spend with him along and receiving permission to hunt on a different piece of property across the valley. Talk about awesome, right! And after leaving his house while heading to his property for our evening hunt, he called me and invited us to come back for a turkey hunt. Check back in the spring to read about my adventures hunting turkey for the first time!

The evening hunt consisted of surveying the property, determining the best way to hunt the land by positioning ourselves in relation to the pattern of deer travel provided to us by our new friend. I positioned myself at the top of the bank, right in the middle of the field where I can see a good 270 degrees on the lower portion of the field. There was about 20 minutes left of hunting and the sun had already gone down. I was glassing one last time as two doe appeared from the woods straight across from me. I kept watching the doe slowly grazing the fields when a buck jumped into my view chasing another doe! My heart was racing. I took the shot. Let’s just say the evening hunt ended with a bang and a lost buck. The blood trail we followed ran straight into private property. This was a difficult learning experience without a doubt, but being able to analyze and improve is very important. 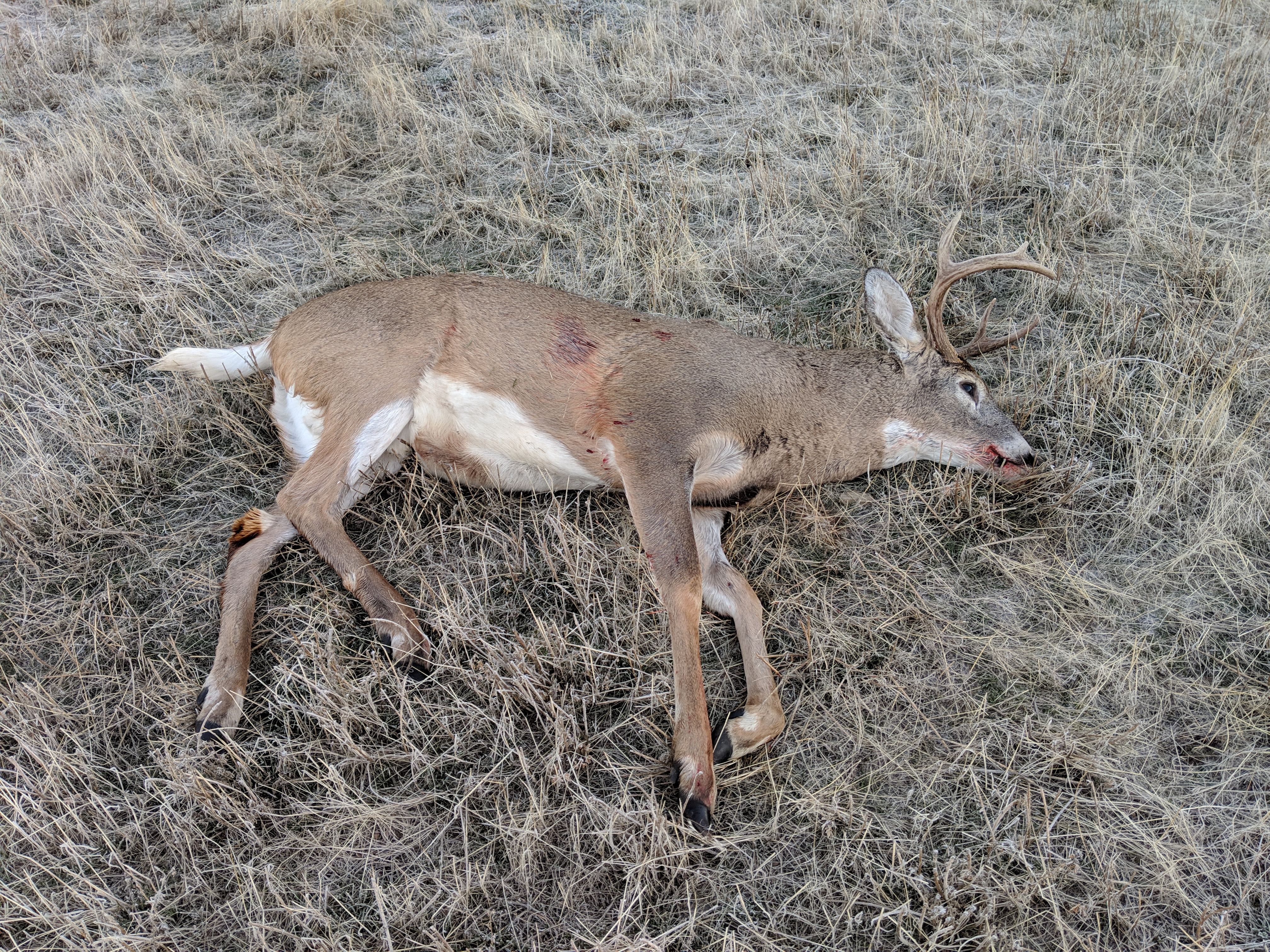 My deep funk cloud rolled in and stayed overnight until the next day. After figuring out what to do differently, I was adamant once again. It was time to begin our morning hunt. After slowly approaching the bank we saw a doe and her two babies grazing the field. Laying low, we continued to glass the upper portion of the field. It wasn’t long before we saw a doe appear from the trees in the far corner of the property. One hour after hunting began, there he was. I quickly grabbed my range finder, 307 yards. I took the shot. Then another was fired. And another. He went down. We walked down the bank, circling around to avoid the buck from disappearing into the private lands. I went up the bank, there he was. I pointed to him as my other half approached the buck from below the bank. Adrenaline kicked in from being spooked, the buck sprung up like a tightly coiled spring and charged in my direction. All I saw was crazy eyes and blood stained hair around his mouth. Quickly dashing out of the buck’s way in an effort to not be slayed and becoming a statistic of horribly gone wrong hunts, the buck ran down the bank. The final shot was taken. Laying in the field the buck kicked it’s back legs and we waited, ready to take another shot, but he was dead.

The real work began. Thankfully we didn’t have to hike up a mountain, we only had to load the deer into my truck and drive him to the corner of the property. Field dressing my first trophy buck took 4 hours. The next day we returned home and visited TNT Custom Wild Game to to get my buck processed. I left the buck’s head with my other half’s dad and he created the most amazing mount for me to display my 4×4 trophy. There’s so much to take away from this hunting adventure. Sitting next to my buck, petting it’s beautiful hair made me feel grateful, humble, and successful. Moments like this one contribute to past adventures and heighten the overall experience. 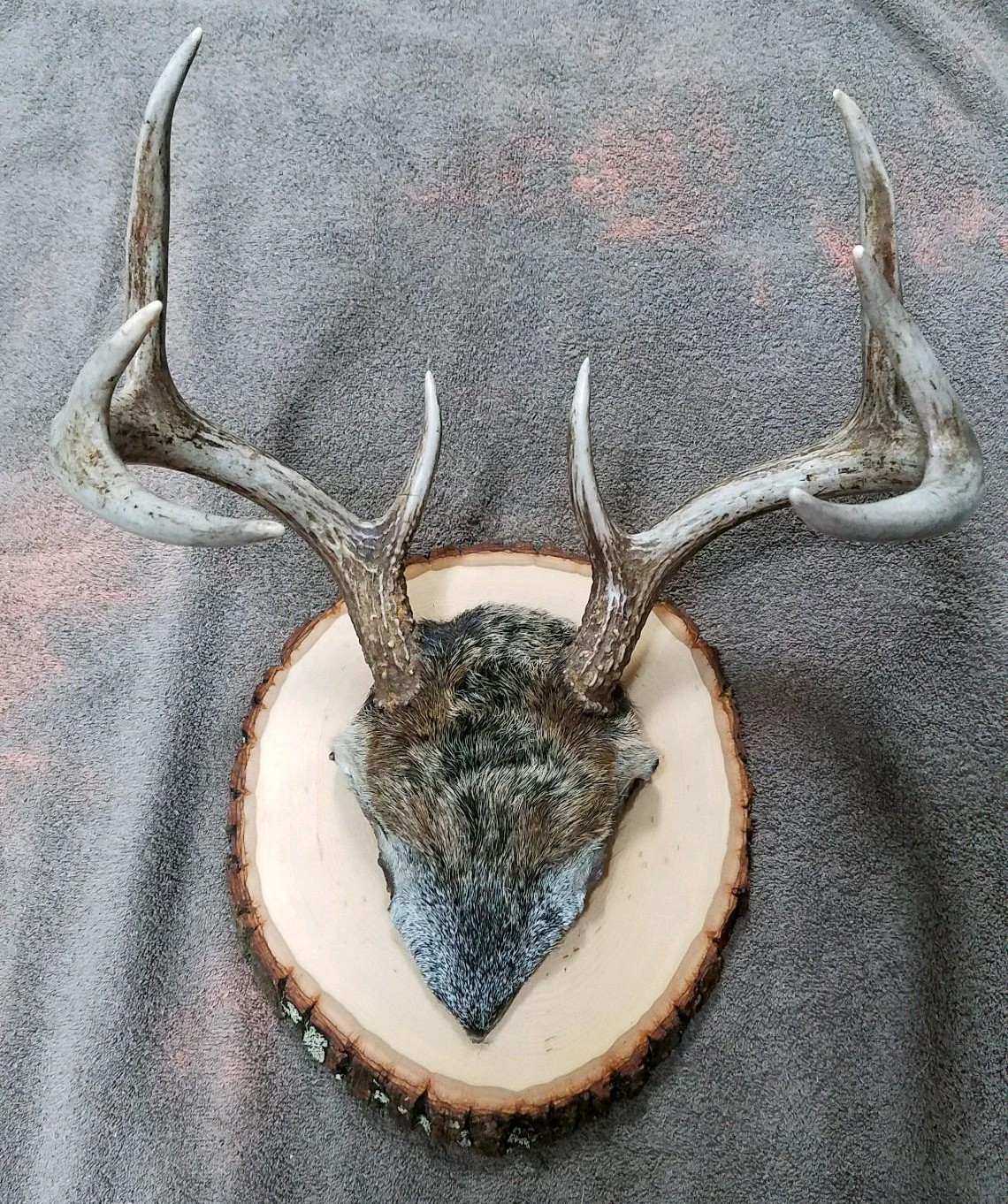 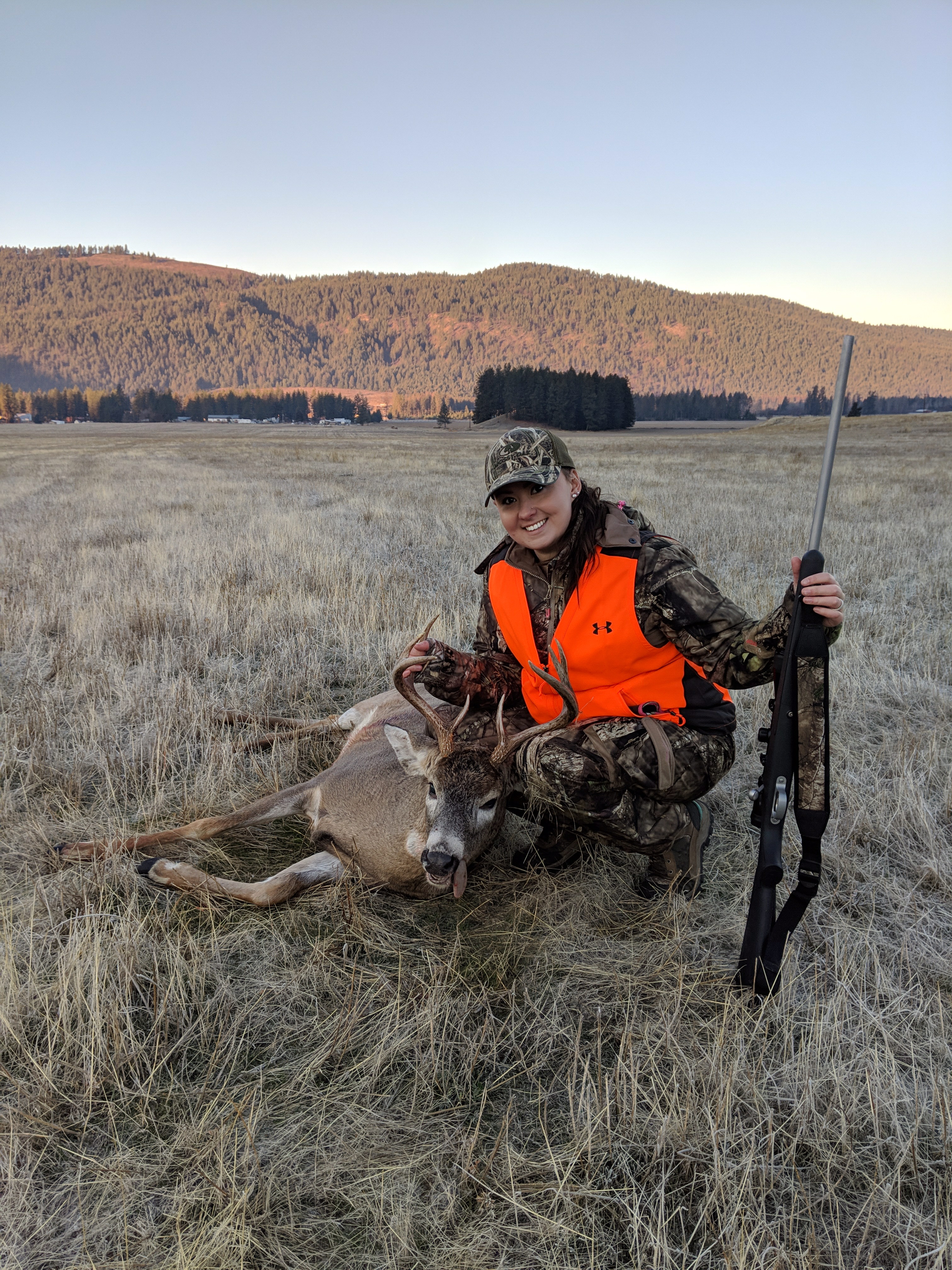